I am going to be taking a break from this blog... perhaps permanently. I just don't crochet anymore like I used to, as I have gotten more into sewing, quilting, crafting and using my Silhouette Cameo. I will still continue to post projects I make in those areas on my other blog, www.sandysewz.blogspot.com. I pretty much just use that blog as a place of reference for myself for projects I have made.

I have also become kind of .... hmmm, what's a good word... disillusioned with blogging. I guess that word will do. It is not as much fun as it was when I first started, and I rarely get comments anymore.

Thank you to those who have been with me through this journey. I wish you good health, happiness and many blessings.

A Star in our Midst

I have some amazing news to share with all of you.

Our adorable little Malti-poo, Lulu, is going to be in a movie!! A real live, Hollywood kind of movie! Can you believe it??? We are still trying to wrap our brains around it ourselves! 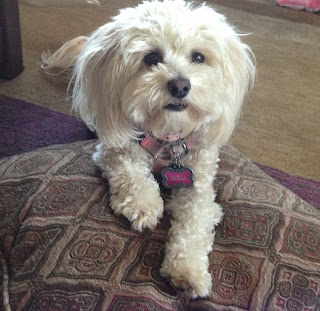 This is the picture that started it all. Here is what happened.

We have a wonderful dog trainer/instructor named Vicki, who is so wonderful with dogs. She has a dog named Kate that can do just about any kind of trick and is so talented that she has her own agent and has been in commercials. Vicki was contacted about this movie role and submitted a video of Kate, but the producers told her Kate was too big, they were looking for a small dog and did she know of any? Vicki told them about Lulu and another small dog that she trains. The producer contacted us and asked if we could send in a picture and video of Lulu. I sent them this picture, along with a video I had taken on my phone of Lulu doing some of her tricks.

A few days later, the producer asked if we could bring Lulu to the Big City for an audition, and of course we said yes!!! I was so amazed at how well Lulu did at the audition - I mean, I know she is a smart dog, but it seemed that she just knew exactly what to do and when. The director fell in love with her, and told me that when he envisioned the dog for this part, it looked just like Lulu. Weeks went by and still no word, and I was starting to wonder if maybe they were going to choose another dog.

Last Friday night, I got an e-mail from the producer that Lulu had been chosen!!  The movie will shoot here in Arizona starting in mid-October, and most of Lulu's scenes will be shot in a town that is about an hour and a half drive away from us. There are some new things that Lulu will need to learn, so we are getting together with Vicki today to start training them.

To say we are excited about this would be a huge understatement! We are so proud of our little dog, and never in a million years would we have thought she would ever get an opportunity like this. Vicki told us that it never, ever happens this way, and that most of the time a dog needs an agent and lots of exposure, so it is really a miracle that this just fell into our laps.

We have had so much interest about this from friends and family that Lulu now has a Facebook page!! If you would like to follow her and her journey through the movie process, just search for Lulu Townsend and look for the above picture.  You can "like" her page and be able to see the updates as I post them there. I will update here on the blog for those of you who don't use Facebook.

I will be crazy busy for the next few months trying to get some holiday crafting and sewing done, as well as shuttling Lulu to rehearsals and filming. Wow, it sounds weird to even type that.. ha ha!  However, I will try to post when I can to keep you all updated. Wish us luck as we start this crazy journey :)

No, I didn't spell that wrong... the word is Zpagetti... as in Zpagetti yarn. 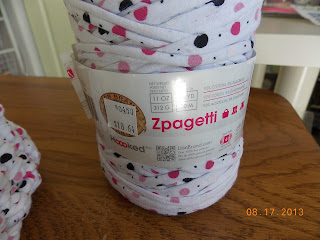 I have been wanting to try this yarn for ages, but have never seen it in any of the craft stores that I frequent (and that includes Jo-Anns, Hobby Lobby and Michael's). I happened to need something the other day from a local craft supplies shop here in my small town and lo and behold, they had stocked it! This yarn isn't cheap (it was $10.64) but then again, it isn't really yarn. It is more like T-shirt material.

I made up a basket with it: 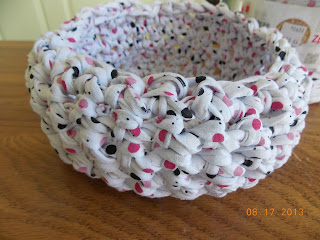 This took me no time at all to make. I used a "Q" hook, but I think I will go down a few hook sizes for the next one I make and see if I like that better. Plus I would like to add some handles to it.

I did not find this hard to work with at all. I have seen reviews of it where people complain about how it is hard on your hands and shoulders, but I did not find that to be the case. That may change when I use a smaller hook - I will let you know.

Have any of you used this yarn before? How did you like it, and what did you make with it? I would love to hear :) 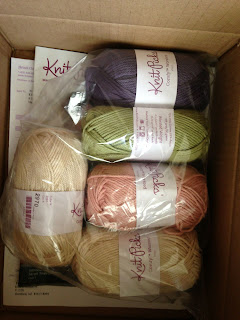 I ordered some Comfy Worsted from Knit Picks to make up a few baby hats with a new pattern I found. Stay tuned!

New Project in the Works

I started a new crochet project and wanted to share it with you, because I absolutely love this pattern.

I found it on Pinterest - the new mecca of all things crafty :)

Here is what I have so far: 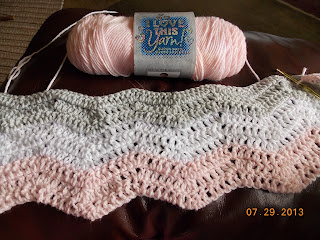 You may be thinking, oh no, not another ripple. Well, actually, it is not even called a ripple, the pattern is called Chevron Crochet Baby Blanket. Chevron is so hot right now, you see it everywhere. I guess it really is a form of a ripple blanket, but it is sooooo much easier than any ripple I have tried before. For some reason, ripples and I never get along.

This pattern, however, is so easy. Now that I've done a few rows, I don't even have to refer to the pattern anymore. Love that!

Laura at the blog The Experimental Home shared the pattern for this HERE.

I am using my all time favorite yarn, Hobby Lobby I Love This Yarn, in pink, white and grey. I'm making it for my dental hygienist, who is finally pregnant after years of trying. She is such a sweetheart and I am so excited for her. I will of course be making lots of things for baby Madison besides this blanket. I love making stuff for babies, it is so much fun.

Hope everyone is having a great week.
Posted by Sandy at 8:18 AM 8 comments:

Just thought I'd check in with you all. Not much crocheting going on. Every time I start something, I don't end up finishing it. I have so many WIPs sitting around here that it is unbelievable. I always think I want to do a big project, but then once I start it, I lose interest fast and have to work on something smaller. Does that happen to anybody else??? Please tell me it does!

I seem to be more into crafting and sewing lately too. Since this is my crochet blog, I don't post that stuff over here (if you're interested, you can go check it out at my other blog, www.sandysewz.blogspot.com).   I just did a bunch of quick, cheap and easy crafts for July 4th.

Hope everyone is doing well. It is incredibly hot here now, pretty much in the 100s every day, so I'm trying to stay in the A/C as much as I can.

Oh, and since I can't stand posts without pictures, here is a cute little rabbit that visited us the other morning: 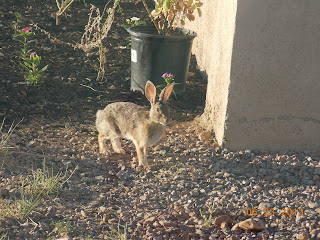 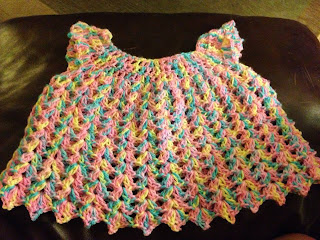 I crocheted this baby dress this weekend, just because. I wanted to crochet something, but I didn't want to start a big project.

This actually started because I fell in love with the yarn - I saw it over at Trish' blog here.  I asked her about the yarn and she said she didn't know the brand, she had picked it up at Wal-mart in the baby yarn section. I happened to find it at my local Wal-mart, it is Bernat Softee Baby and the color is called Pyjama Party.

I used a pattern I had used before, only a different variation on it. It is the Angel Wings Pinafore pattern by Maxine Gonser, but Suzetta at Susie's Stuff re-worked the pattern so that it is worked in the round. I really loved it, will definitely use it again. The pattern can be found here. 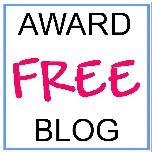 Be a Sweetie and Take my Button With You!

Check Out My Sewing Blog 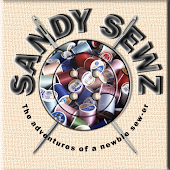 Sandy
This is a place to show the cards I make.

BLOGS I LOVE TO READ: